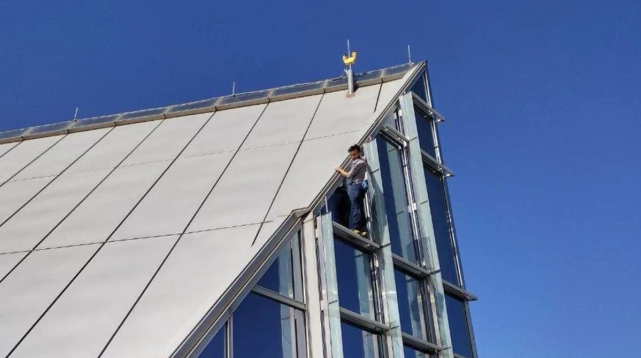 In his latest protest against abortion, a man who calls himself “pro-life Spider-Man” ascended Oklahoma’s highest tower on Tuesday. Local police claimed they were aware of someone climbing the 844-foot-tall Devon Tower in downtown Oklahoma City on Tuesday morning and asked citizens to stay away. Maison Des Champs was apprehended by first responders and police after successfully climbing to the summit.

Following his apprehension, Devon Energy tweeted, “This morning a climber scaled the side of Devon Tower. We are happy to report that he is now safe. A huge THANK YOU to our local OKC emergency responders for getting here quickly and taking action.”

According to the Oklahoma City Police Department, Des Champs, 22, will only face a trespassing charge as a result of the climbing feat. The daring climber is a finance student from Michigan who has scaled various skyscrapers with nothing but a chalk bag and his clothing on his back to collect money for anti-abortion groups. Authorities also arrested another man operating a camera drone.

The activist filmed a video of himself ascending the tower and asked followers to donate to letthemlive.org in an Instagram story uploaded by his account, prolife spiderman. He remarked, “Out here at Devon Tower, Oklahoma City,” Des Champs remarked, adding that there were people on the ground gathered to observe, but “no helicopter yet.” Des Champs also climbed a 60-floor building in San Francisco, California, in May to promote similar anti-abortion causes. In August 2021, he climbed the 600-foot Aria Hotel in Las Vegas to protest Nevada’s COVID-19 mandates.

His latest stunt took place in a state that recently enacted the country’s strictest abortion law, prohibiting physicians from performing abortions at any stage during pregnancy unless it is to save the mother’s life or if the pregnancy is the result of incest, rape, or sexual assault that has been reported to law enforcement. On May 25, Gov. Kevin Stitt fulfilled a campaign pledge to “sign every piece of pro-life legislation that came across my desk,” signing HB 4327 into law.

The act comes as the Supreme Court prepares to rule on whether to overturn Roe v. Wade’s precedent. A draft judgment from the Supreme Court released on May 2 indicated that a majority of the justices were willing to reverse the 1973 rule that legalized abortion statewide. A definitive decision on abortion is expected in the coming weeks.